I hope your year has been full of splendor and joy, or at the very least had a very liberal sprinkling, or generous coating of both! Outside the wind is whipping over the recent snow fall. When we had the first snow fall, it was like hunks of butter on warm bread to mostly sink into the ground, but leaving coverings in places. The next big fall we had was like a layer of thick white marmalade - it was sticky, and not going anywhere.

The snowfall before Christmas was like a blanket wrapped around a child, gently covering everything, heavy and silent helping to bring the sleep of winter. It now lies everywhere. It has pushed trees over, some old-timers leaning against their still upright siblings, as they support it lovingly, moaning gently in the wind - the only sound, it seems, in the woods apart from the stream. There is ice over the streams and brooks now; commuters of black pockets of air can be seen rushing downstream, shape-shifting as they go. Moe jumps in and out of depths of white powder, taking delight in the now easily spotted squirrels and chipmunks, dark and dashing against the white. She tries to beat them to their tree hideout but has yet to catch one!

The trees were not totally denuded of foliage when the snow came and with the wind that has been visiting, these leaves lie in abundance on the surface of white. Pine trees have been ejecting cones both large and tiny. Other trees have spat out their own seeds in preparation for spring. Red berried bushes, stand out against the background of white snow and evergreens.

It's been a busy year, and it is not yet over! There are many things I am thankful for over the last 12.

Looking at the calendar I have thus far completed 88 performances at 77 venues, worked with Doug Lipman for the sound at this year's Sharing the Fire - the Northeastern Storytelling Conference, told at Dawnlands Festival, and presented workshops and told stories at the Northlands Storytelling Confabulation, completed a book for publication next year, been the headline at the White Mountain Storytelling Festival, contributed to two of the four issues of Storytelling Magazine, and written and recorded a full retelling of Gilgamesh, for middle school aged kids and up.

It's been a fun year and I have met some great people on my travels.

Working with the sound system for STF with Doug Lipman was probably the most challenging and stressful of all. Going to a gig of my own and not making the sound sound good is one thing, to be responsible for the sound of others is daunting. People pay good money to enjoy, learn and HEAR others at Sharing the Fire, and making sure people were heard well was our job. I think Doug and I both learned a lot from this experience. We were very happy we visited the venue and tested the sound equipment a couple of months before the weekend, and ironed out the kinks we found. Practice, practice, practice! One thing I learned is that Doug is great to work with.

The organizers and people I met in Lake Geneva, Wisconsin were wonderful. The feeling there at the Confabulation is very welcoming and family-like. Although a smaller version of STF it is every bit as full and good. The presentations and storytelling were superb. I learned from many people here in WI and I am grateful for that.

I was thrilled to be performing at the White Mountain Storytelling Festival in Waterville Valley, New Hampshire back in September. Although I was the main feature, or headliner, there were a lot more storytellers sharing their own tales, too and I was able to see many of them. This is a great weekend of stories, and more stories, and even more stories. From ghost tales on Friday night, to the sacred stories on Sunday morning, there is someone to hear. If you like to hear stories, then this is a great festival to go to.

My work on Gilgamesh was a lot of fun, and a lot of work. As when I dived into the Ramayana (pronounced Ram-EYE-an) a few years ago, I totally immersed myself into the Sumerian epic of the king of Uruk. Figuring out a way to tell the story and make it "fun" for tweens and young adults, yet appropriate and authentic was a challenge. I knew I wouldn't make a scholarly version of the tale, yet I wanted to stay as close to the original as I possibly could. I think I succeeded and from what I have heard back, I seems I did! And I loved the illustrations Aidan did for the book.

Not sure what's in store for 2018. Under the Oaken Bough will be published by Parkhurst Brothers sometime in the spring. This collection of folk and fairy tales is a little gem with eighteen stories, an author Q & A, vocab list, and tips-on-telling section. The stories were written as I tell them - as best as they can be in written form! I am hoping that I will be able to get The Epic of Gilgamesh, a retelling, printed and in book form during 2018, and a new kids/family CD out. It's been way too long. And I have plans for a podcast - still! But they are much closer to happening now! I have conducted some interviews with other storytellers, and have recorded a few stories for it, but need to get more done and then get it edited.

Anyway, I hope the year for you has been filled with wonder and you have had time to smell the roses!

I raise my glass (of spicy hot chocolate) and offer a toast to a successful and harmonious New Year.
Here's to 2018! 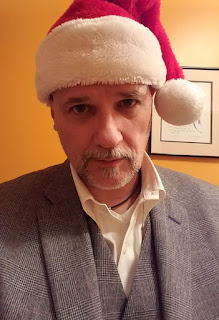 Peace,
Simon
Posted by WorldofStories at 11:23 AM