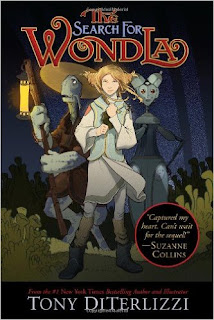 The first was a kids book, The Search for Wandla by Tony Dizilla. You might remember Tony Danzilla from the Spiderwick Chronicles (which I much preferred to A Series of Unfortunate Events (although those were a lot of fun). Because of my love for the Spiderwick Chronicles I truly looked forward to The Search For Wandla. This book, too, is a lot of fun. The world creation is amazing. The story is well thought out and a rollicking good read, but in places the writing seemed a little off. Only a little. The book is one of three, I believe, and I am still hemming and hawing about reading the others. The characters and world are really good. It is about this young girl, Eva Nine, who lives in this pod, and is being trained to become ready for the outside world. We get the impression this is post apocalyptic. The escape to the outside world is something the heroine is ready for mentally, even though her robot "MUTHR" (Multi-Utility Task Help Robot) thinks otherwise. The entry to the outside world is jump started by an incredibly violent creature we learn later is called Besteel. This creature invades the pod and pretty much destroys everything. Eva escapes into a world which is nothing like the world she was preparing for. She has only her suit (which is able to monitor her health and hydration), an Omnipod, and what we believe is a torn photo showing a happy family complete with a Muthr and the words Wond La in the image. Eva Nine wants to find others like her, and find and become part of this happy family. We suppose all other humans have these devices called Omnipods which scan the world and creatures around them to tell them friend or foe. However as Eva scans the world around her, the Ominpod finds nothing in its data banks which match the things Eva finds.
The book is about her finding her way through this strange and worrisome world. Eva meets and make friends with some of the creatures of this planet, but also finds, along with Besteel, others who might harm her. Eva finds a city, and hoping to find humans, finds only other creatures and that the ruler of the city has a museum which featured some of the items (such as an Omnipod and jacket) which are part of Eva's world.
We learn which characters we can trust, and which ones we cannot. We find beings who want to help Eva, and those who would like to see her as an exhibit, and of course there are creatures we are not sure of yet.
The Search for Wandla is lightly illustrated with Tony's amazing artwork giving us a true glimpse of his world, allowing us to imagine the rest. The book reads well on the most part and as it is a science fiction book for children, they should love it. In fact as I wrote this, I have decided to read the others! I try to encourage boys to read what might be perceived as a book for girls - 'It's about a girl, why would I want to read it?' The main protagonist in this book is a girl, but there are male characters boys could possibly identify with, and there is so much adventure I think everyone would enjoy this book.
UPDATE: 4th September 2016 - Just finished the second in the series - A Hero for WondLa. Eva has a sister! Eva grows a lot and becomes a Very Strong Young Woman. And the plot thickens. 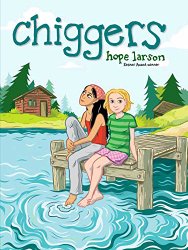 The only other book I have read all summer, is another juvie books, This graphic novel I would suggest for slightly older young readers, younger teens apposed to tweens, as it implies sex with boyfriends (although does not talk about it) and mentions girls periods. I read it because I give books away to young people and wanted to see what this was about, that and I have an 11 year old daughter.
Chiggers is really well written and beautifully illustrated by Hope Larson. Hope also did A Wrinkle in Time: The Graphic Novel, and I have to say from what little I have read (these two) I really like her work - a lot. Chiggers is about girls at summer camp (my daughter's first was this summer) and all that goes on there. From boyfriends in rock bands dumping their girl friends in letters, to chiggers (of course) to back biting between groups of girls and that painful part of trying to fit in.
The story centers around Abby who in the past has been great friends with Rosie. They are looking forward to hanging out with one another, despite the three year age difference, only Rosie is now a cabin assistant and has no time to spend with Abby. Abby's other camp friends seem to have become too cool for Abby (with piercings and 'proper' boyfriends), but when one leaves, they get a new cabin mate, Shasta. Shasta is very different and takes to Abby, but Shasta has a few things she keeps close to her chest. Can Shasta be trusted, is she a true friend? Shasta and Abby become friends of sorts; they definitely become confidants. Despite the others in the cabin calling Shasta weird, Abby stands by her. Years ago Shasta was struck by lightening and strange things happen to her when there is strong electrical fields. The girls give one another new haircuts. Abby hears who she thinks are friends put her down. The story jumps about, but in a way that works well. It is like taking the boring bits out, and keeping the pertinent parts only, which is what makes it work. It is a touching story of girls getting on and not getting on at summer camp, and shows how some people grow, and others, well, they are who they are!
It is a warming book in a way, almost a form of poetry about girls growing up. I will be looking for more of Hope's work. I think I will try Larson's Mercury next. 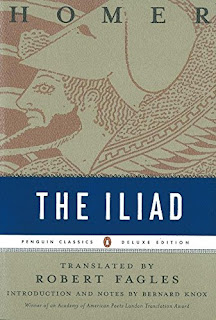 The other book I am in the middle of is Homer's Iliad, translated by Robert Fagles (Penguin Classics). As I said I am half way through, and it is a great story and a wonderfully readable translation. I have to say Agamemnon is a total arse. As is Priam, but in a very different way. It seems Troy brought it's problems unto itself with Helen. It goes to prove, to me at least, that humans do go to war over the most stupid of things. All those lives lost for what? Pride?

I hope you got some good summer reading in and got more in than I.
Watch out for the next blog coming very soon.
Peace,
Simon
Posted by WorldofStories at 6:40 AM