A Picture is Worth a Thousand Words - or is it?

I read a lot.  I read for pleasure (currently into the fabulous 'Life' by Keith Richards and James Fox), many of which get added to the list of books I have read so far this year here on my blog.  I read many anthologies and collections of folktales and fairy tales and poetry too (which I do not list due to the number!), and also for my audio book work (which can be seen on Audible.com)!  But I am also a photographer.  I studied photography at at the Hereford College of Art on Folly Lane in Hereford and it was my only income for a good number of years as I made a living taking photographs, trying to tell stories with a shot or series of photographs.  I also love artwork of many kinds and have a passion or a love of sorts for graphic design and illustration work.

So, when I go dumpster diving at libraries, or rummage through things left at the transfer station or at yard sales, I often look for book titles either to read, to admire, or yes, strip.  Strip?  Sometimes there are books which are beginning to go moldy but which have great illustrations in them or photographs, or they have great covers.  Some of the old and molding books get stripped of all their pages and I made journals from the covers (I am still trying to perfect these.  It is fun to write in an old book legitimately)!  Sometimes I remove the pictures only and leave the books in the dumpster.  Bringing home books going moldy is not an option.

I have a collection of artwork from many books and one day I will do a project with some of them. Sometimes illustrations get pasted on to or in letters to friends or family, but recently  when I was looking at some illustrations there seemed to be a little disconnect between the caption under the image and the image itself.  Mostly it had to do with the expressions on the character's faces. One struck me in particular from Sir Walter Scott's "Quentin Durward', a book I admit I have never read!  It looks like a love scene.  The heroine, or damsel in distress, has her hands clutched (by Quentin) over her heart.  As she looks at her presumed lover, she is quoted as saying: "Durward!  Is it you? Then there is some hope left." But looking at her face she seems, well, not so convincing. And my 11 year old inner self took over and I thought, 'she's looking up his nose and there is something up there!' I began to look more carefully at the expressions of the characters in the other illustrations and sure enough there were grounds to play and speech and thought bubbles came to my mind. 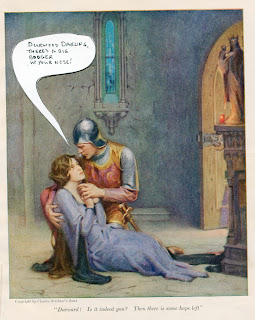 The above was the first of four I, er, messed around with.  The others will be going up on my Facebook account.  In each I have left the original caption.  Now look closely at our heroine's face.  Does it really say "there's hope" or does it say "I am slightly uncomfortable here" with the look in her eyes and raised shoulders?

And so I ask: if a picture can speak a thousand words, what is it REALLY saying?

To see the other pictures I have re-captioned, visit my Facebook page!  They will be going live over the next few days!
Peace,
Simon
Posted by WorldofStories at 6:31 AM

Stipping and recaptioning... I LOVE THAT IDEA! Brilliant.

New fan of your blog. Looking forward to reading your upcoming posts.