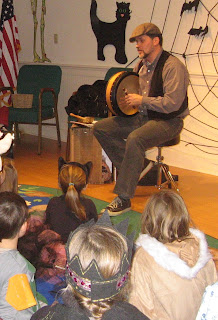 Okay, so I am not half way dead, but half way through the Halloween "season" of storytelling!  I have been to some great places, and seen some wonderful costumes, and met fantastic people.  Sometimes I have had packed rooms in larger libraries, some have been small crowds in more humble libraries, but all have had a great community.  Sometimes you see similar costumes - three batman's (or batmen - I am not sure) from differing stores and eras!  But there have been a lot of homemade, or pieced together costumes that have been a joy to see.


At Moultonborough the other night EVERYONE was dressed up and with very few duplications.  Tonight I had a great time further south and the only one dressed up was the librarian, Kelly of Green Gables, but it did not matter.  The kids and their care providers had a great time. I was asked for more Scooby Doo and less Harry Potter as the audience was going to be young, and it was.  I told a bunch of silly slightly scary stories that had the trustees laughing with surprise and the kids giggling with delight.  This goes to show what I have thought all along:  It is really not about scaring people, it is about having fun.

And talking of fun, Steve Blunt showed up at one of my performances and we jammed a little before I started on the stories, with me banging my drum and Steve blazing away on the harmonica. I am hoping that there is a picture of that somewhere that I can share.  And Steve gave me a link to his new video at: http://www.youtube.com/watch?v=wHDkYTFx-2M So why not check THAT OUT for FREE!  Steve Blunt is a consummate professional - singer songwriter, historical entertainer, and performer for all ages.  He confided in me that he also tells the odd tale or two, but don't say I told you!

Now remember: whilst you are out "trick or treating" remember to be silly, be safe, and have fun.  And, whatever you do, do NOT eat The Black Bubble Gum!

Thanks to Judi K for the the photo!
Posted by WorldofStories at 5:57 PM