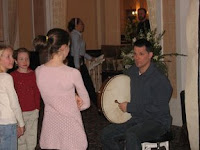 I was doing a family storytelling “performance” at the Mount Washington Hotel and Resort in Bretton Woods, NH last week. The storytelling began at 8.30pm and was to go until 9.30pm. I was wondering what kind of audience I would be getting at that time – a bunch of older cynical kids eager to get away from younger siblings or their parents putting the wee ones to bed; adults with nothing better to do; younger kids tired and crabby from skiing all day and wired on hot chocolate before going to bed? It was all of these! But the group was a great group for all that. Some stayed for one story then left, some stayed for a few tales before leaving, but most stuck out the whole set.

I had set up early and sat tuning the bodhran when people began to arrive early and waited expectantly for me to start – a good 15 minutes early. So, yes, I began - with a full moon tale, which is short, whilst we waited for the rest to gather and join us. At the end of the tale I lead everyone outside onto the balcony and looked up at the almost full moon to show that “hare was still up there on the moon, wondering how to get back home.” A buzz ran through the audience which I got a kick out of, I have to say! Then the ‘real’ storytelling began. I ran up to and a little over my 9.30pm finishing time and parents carried out their sleepy children, older kids gave me thumbs up and nods as they coolly left, and the adults who were there with nothing better to do left with smiles on their faces. A great feeling, all round I think.

A few folks came over to say a few words after I had finished, and I was thrilled myself when one couple came over with their six year old, still taking photos of me and my backdrop, to say they had had a great time. Why was I thrilled about this one family? We talked for a while about stories and how their child loved them. I commented that he had been so engaged that they must tell him a few tales themselves. It turned out that Grandma told the tales, and they were Indian tales. The family’s roots were in India and Grandma knew all the traditional tales and told them to her grandson. It seemed that dad (son-in-law) was a huge fan of these storytelling sessions with Grandma too! I suggested that they record these stories, not just for themselves, but also for future or other grandchildren who might not be so fortunate to have Grandma so near by. They seemed to be keen on the idea. It was great to hear that all the way from India the child was getting a good dose of traditional storytelling from a close family member – something, I fear, is rare today, even when Grandma is just around the corner.

Simon
Posted by WorldofStories at 11:05 AM